I am a long-time fan of “Battle Angel Alita,” going back all the way to when Viz released the translation of the Gunnm graphic novels, written by Japanese manga-master Yukito Kishiro, back in the 1990s. Viz renamed the main character from Gally to Alita (which, admittedly, does sound cooler), changed “Zalem” to “Tiphares,” and gave the English translation the title “Battle Angel Alita” instead of Gunnm, which means “Gun Dream.” I also watched and quite enjoyed the two part Gunnm anime OVA when it came out around 1993. It was one of the many 90’s anime and manga series that my fellow geek friends and I enjoyed to read or watch, and talk about at length as we tried in vain to translate glossy New Type magazines and comprehend the latest un-dubbed, un-subbed anime releases fresh from Japan. Yeah. We were those weirdos.

But as much as I loved Battle Angel Alita, I never imagined it would make the big screen. Unlike Pokemon, Dragon Ball Z, or Naruto, which pretty much everyone has heard of, even if they’re not anime fans, Battle Angel Alita is very niche–even among anime fans. I had heard mummerings of James Cameron’s interest in making an Alita film, but that was years ago, and I figured that the major Hollywood studios simply wouldn’t go for it. I was also ambivalent about the idea, and honestly hoped nobody would ever butcher Alita into a live-action Hollywood adaptation. The last thing I wanted was to see Alita become the next Dragonball Evolution. Ugh!

When the first teaser trailer came out in in late 2017, I was underwhelmed, and frankly, pretty worried. What I saw in the teaser did not look like the makings of a good adaptation. However, the next two trailers not only peaked my interest, but had me clamoring for the film. Rosa Salazar looked great as Alita, and with the film not only produced by James Cameron, but also directed by Robert Rodriguez, my hopes were high. Moreover, the motorball sequences looked like they would be stunning. I also recognized quite a few scenes from the manga and anime OVA.

The film was released on Valentine’s Day 2019, I went to see it that weekend, and my jaw hung open in awe for the entire duration of the movie. I even had tears, even though I already knew what that one heartbreaking scene would entail. The movie was all I could have dreamed it would be, and more!

I could just well end my review on that note, and if you haven’t see the movie and have never read the manga, you should stop reading here. Spoilers below. You have been warned.

It is true that no adaptation from a book, comic book, or manga to a two hour movie can ever be an exact translation. But, whereas some adaptations just take some characters and a few scattered plot points, then fly off into whatever loose retelling the writers and directors conconct, Alita: Battle Angel comes about as close to an exact adaptation as is physically possible, given allowances for the medium change. And that by itself is a remarkable feat of screenwriting and directing.

Having both read the manga graphic novels and watched the OVA, I have realized the trick that Cameron, Rodriguez, and the writers used to accomplish this feat. They didn’t adapt the manga. They didn’t adapt the OVA. They adapted both, pulling from the plots of both the manga and the anime, and weaving them back together to create a compelling movie that retained some 80% of the first three (and some of the forth) manga volumes.

If that seems unclear, then some backgrounds may help. The two part OVA anime basically followed the first two Battle Angel Alita (Gunnm) manga volumes. Those volumes never got into motorball (motorball started in volume three), so motorball never appeared in the OVA. In additional, the OVA introduced the character Chiren (who wasn’t in the manga at all) as a foil for Ido, and also combined a few of the bad guy cyborgs (Makaku and Kinuba) into a single bad guy, Grewishka. Vector’s motivations were also slightly different, and he had no involvement in motorball, nor did Hugo, which was also true of the manga, since–again–motorball did not appear until volume three. Other than that, the story mostly followed the manga.

The movie Alita: Battle Angel is clearly plotted directly from the OVA, as both Chiren and Grewishka are present, and they uses the name “Zalem” for the floating city, rather than “Tiphares” (which was the name Viz comics used when translating it to English). But instead of making a direct adaptation of just the OVA, Cameron and Rodriguez wanted to include the motoball games from volumes three and four. Ingeniously, they made Vector a motorball kingpin rather than a mere crime boss. This let Hugo maintain his shady job as a cyber-parts thief working for Vector, who needed the parts to outfit his motorball players. At the same time, this allowed Alita to be introduced to motorball much earlier than in the manga.

The way the manga played out, Alita did not join the motorball circuit until (major spoiler!) Hugo dies, as a way for her to deal with the pain and loss. Doc Ido also teams up with the motorball champion, Jashugun, determined to help him beat Alita in the hopes that her defeat in motorball will convince her to give up the deadly sport (a little crazy, I know, except that Jashugun was actually a pretty good guy, and he didn’t want to kill Alita, unlike most of her adversaries). Jashugun makes a brief appearance in the new movie (and like Nova, his surprise appearance had been kept secret), and the cameo is so out of place that it can only be a setup for a sequel. That means the sequel will likely feature more motorball (yay!).

In the new movie, Alita still becomes a hunter-warrior after learning that Ido is a hunter-warrior (just like in the manga and OVA), but unlike either of those, she discovers her Berserker body in a crashed Martian ship, rather than Ido finding it. It’s a significant change, but it makes more sense given the need to compress the plot and focus on Alita, rather than Ido. After she soundly trounces all the hunter-warriors in her kick-ass throw down in the Kansas bar, she faces Grewishka in the underground ruins and has most of her original body (the first body that Ido provided) destroyed. Although there are differences in the sequence of those events in the manga, the end result is the same. The destruction of her first body forces Ido to upgrade her to the new Berserker body, despite his misgivings. 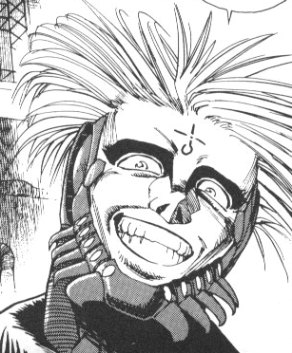 Another big change from the OVA is that they gave Zapan a bigger role, and one that better matched his role in the manga (in the OVA, he was just a minor background character). Zapan is also combined with another bad guy, the hunter-warrior Clive Lee, who was in both the manga and the OVA, and who was ultimately the one who severely wounds Hugo. In the movie, Clive Lee makes no appearance, and it is Zapan who severely wounds Hugo. This is a necessary change because you can only have so many bad guys before the audience gets lost. The manga was originally a serial, and as such, Alita would face and defeat various enemies one after another. Movie plots work different, and between Zapan, Vector, Grewishka, and maybe Chiren to a lesser extent, having yet another bad guy appear in the last act would be a bad mistake.

Besides the early introduction of motorball, Vector’s motorball tie-in, Zapan’s greater role, and a few other minor changes, the biggest change of all was Doctor Desty Nova’s early introduction. Desty Nova did not appear in the manga until volume five, well after Alita’s motorball gig, and he did not appear in the OVA at all. Unlike the movie, he only controlled people indirectly, rather than through some cybernetic telepresence mind-control thing (although he does eventually have the ability to copy himself to different bodies). 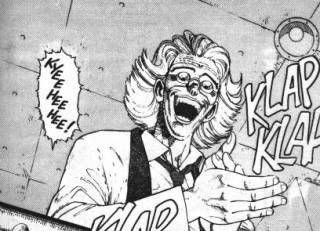 However, Desty Nova is the ultimate villain in the original manga series, a kind of super-genius, mad-scientist puppet master from Zalem whose motivations are to just be a super-genius, mad-scientist puppet master. It should be noted that Desty Nova’s appearance in the new film had been kept secret until the movie’s release, complete with a surprise reveal that the character was played by none other than Edward Norton! A round of applause, if you will.

Besides the early cameo introductions of Jashugun and Desty Nova, another character also has a surprise cameo: the Martian panzer kunst warrior, Gelda. Gelda was Alita’s trainer in panzer kunst, and she didn’t even make her first appearance until the second Battle Angel Alita manga series, Battle Angel Last Order. I haven’t ready the Last Order series, so honestly, I really don’t know anything about Gelda or her history with Alita, other than the broad facts from the Battle Angel Alita Wiki pages.

Alita: Battle Angel is a great film, and a truly marvelous adaptation of the manga which remains unswervingly faithful to the source material. I hope there will be a sequel, and the movie is perfectly setup for that sequel with the introduction of both Desty Nova and Jashugun, as well as Zapan’s literal loss of face.

Knowing the manga, the sequel will probably cover volumes four, five, and maybe six. I suspect the sequel will back peddle the “fast forward of a few months” seen at the end of Alita: Battle Angel and begin with Alita’s rise through the motoball league. She will face Jashugan, and she will hopefully meet and befriend Jashugan’s endearing little sister, Shumira. I also hope Alita will put together her team of motorball misfits, including Ajakutty, Armblessed, Zafal Takié, and, of course, the lovable Tiegel. I predict Zapan will be back, and Desty Nova will recruit him and rebuild him either with another berserker body, or Nova will steal Alita’s berserker body and give it to Zapan (as happens in the manga). Beyond that, things get a little murky, because Alita does not get to Zalem until the last volume (perhaps that would be a third movie), and even then, it’s more of a dream sequence. Apart from her stint as a techno-club DJ (really!), much of volumes five and onward are spent in the badlands outside of Iron City fighting numerous villains and trying to thwart Nova’s plans.

Regardless, there’s plenty of material for two more movies, and I certainly hope Alita: Battle Angel is successful enough in theaters for those sequels to get the green light.

And that’s my review, from me–a long-time fan of Alita–to you, who are hopefully either already a fan, or soon will be. If you haven’t see the film already, see it now. And see it in 3D. You won’t be sorry.