For about a year now, the factory radio and 6-disc CD player in my car has slowly been dying. So on January 10th I finally bit the bullet and purchased a replacement system — an in-dash car MP3 player which I have been wanting, but which was never very high on my priority list until now. So this is my review of the unit in questions: the  Sony Xplode CDX-GT630UI–the good, the bad, and the not-so-particularly-optimal. 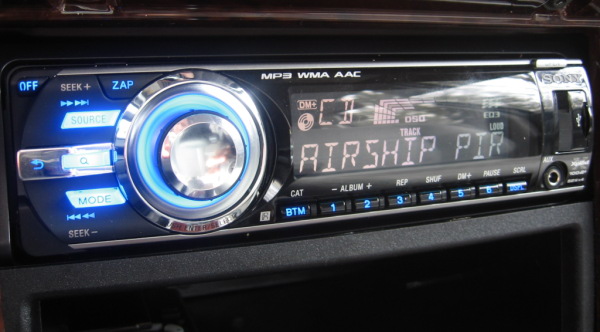 Read on for the full review.

Before purchasing, I spent some considerable time researching in-dash MP3 players and looking for a good local store that could install it for me (I didn’t really want to bother with that part). The MP3 player needed to have a nice aesthetic appearance and a good display, as well as sufficient support for multiple input devices. While don’t own an iPod, it would be nice to have a system I knew I could plug an iPod into. While most in-dash MP3 players only play MP3s off a burned CD, I wanted one that supported some kind of solid-state memory device, such as either an SD memory cards or a USB drive. My first preference was for one with SD memory cards support, as SD memory cards (like those used in cameras) are tiny and unobtrusive. But I only found a small handful of MP3 players that supported SD memory cards, and I really did not like the other features on those units or their appearance. On the other hand, there were quite a view in-dash MP3 players on the market with USB memory stick support.

Ultimately, I settled on the Sony Xplode CDX-GT630UI. The GT630UI seemed to fit most of my criteria, lacking only the mythical SD memory card support. It also supported iPods through the USB port (although it does not have a separate direct iPod connection interface like a few of the more advanced models do). I also ordered the smallest, least obtrusive USB memory stick I could find–the 8 GB PicoDrive from SuperTalent, which is quite literally an inch long. I’m sure a few years from now we will balk at memory sticks with 8 GB, but for now the 8 GB PicoDrive is sufficient for storing the majority of my music collection, and I can always buy more if I need too.

For the most part, the GT630UI operates as expected. It comes with a good manual that allowed me to set up the configuration with around 20 minutes of work (some of which was just me playing around with the settings). One thing I found interesting was that you could change not only the brightness of the back-lighting, but the color as well. However, it has only 2 colors: blue and green. It would have been nice for a wider color range, such as red, orange, yellow, purple, or gamma-ray… well, on second thought, maybe not gamma-ray. At any rate, I stuck with a blue back-light, which was the factory default.

Actually using the GT630UI is a bit of a mixed bag. The interface is not what I would call intuitive, but a review of the manual does make the operation of the controls fairly clear. Embarrassingly, I struggled to figure out how to skip forward and backward on the tracks. It turns out the “buttons” for track forward and track back do not look like buttons at all, being smoothly blended in with the contour of the far left side of the unit. The track forward button is particularly difficult to push due to its proximity to three other buttons–the off button, the “zap” button, and the input source button. Half the time I push the track forward button I end up pushing one of these other buttons as well, which is extremely frustrating. And no, I do not have fat fingers. This problem is usually due to the fact that I am trying to watch the road while driving and just end up pushing the wrong button since the smoothly blended track forward and track back buttons have absolutely no tactile feel whatsoever. All the other buttons on the unit are raised buttons, so why they would make these buttons flat and “tactilely invisible” is beyond my reckoning. I also strongly dislike the tiny size of the numbered buttons along the bottom of the unit, which also double as various sound mode, album up and down buttons, and display mode toggles, and are very difficult to find by feel while driving.

On the other hand, I do like the album and track scrolling capability. One simply needs to hit the browse button (I don’t know what the buttons is really called, but that’s what I call it) then used the large wheel to scroll up or down through the folders and songs. Pressing the wheel will select whatever folder or song you have scrolled to. If a song, it will begin playing; if an folder (aka, an album or directory of albums) it will enter that folder and display its contents (which could be other folders). I have my songs organized by Genre, then under each Genre the Artist or Band, and under the Artist or Band the individual albums. Sony’s scroll wheel for the GT630UI makes it easy for me to navigate even through this 3 level deep folder/album structure.

One small complaint that I have is that the GT630UI beeps at me whenever I shut off the car. “Beep-boop Beep-boop Beep-boop.” It drives me crazy, and there is apparently no way to shut that off. The unit does have beeping feedback whenever you press a button or click the scrollwheel, and that beep can be turned off. However, even turning that off does not make the beeping go away when I turn off the car. It also does not matter if the GT630UI is switched off at the time I shut off the car–it still beeps. I can only assume that it’s just saying goodbye in its own beep’n way.

But what really urks me about the GT630UI is the way it orders the MP3s. The GT630UI, like most if not all in-dash MP3 players, does not support playlists. I have no idea why they don’t, but it would be a tremendous improvement if they did. But, since the GT630UI does not support playlists, I figured, as any reasonable person would, that the unit would simply play the song’s in alphabetical order. Thus, I prefixed the file names of the songs in my albums with the track number, such as 01, or 02, or 03, and so forth. Surely, then, it would play them in their correct order. But no. The GT630UI just seems to play the songs in whatever order it feels like, without any apparent rhyme or reason. It is not playing them randomly, however, and does consistently play the songs in the same wrong order every time. Nor is it playing them by the file’s date/time stamp (I check that too). I really have no idea what kind of song ordering scheme the GT630UI uses. If someone knows, please let me know! It’s driving me bonkers.

Ultimately, I cannot recommend the GT630UI to anyone. Most of the problems I can live with, but the weird song ordering scheme is the death-blow as far as I’m concerned. I will not get a GT630UI in my next vehicle, and I will make darn certain whatever unit I do get in the future will have a sensible and logical means of ordering songs (either by playlists or alphabetically).