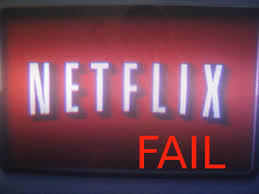 It turns out that Netflix is actually run by a drunk orangutang.

Instead of doing something sane, such as expanding their streaming library or adding new services like music, the CEO recently announced that they are complete splitting the DVD rental business into new company stupidly called Qwikster (pronounced a bit like Qwitter). And in the official Netflix blog, the CEO, Really Hasty, I mean Reed Hastings, admits that he’s a total goof-ball, and that the whole thing is going to be terrible inconvenient for their customers.

Follow this link for Reed Hastings’ wild ramblings, and the 20,000+ flame comments from irate customers

He says, and I quote: “A negative of the renaming and separation is that the Qwikster.com and Netflix.com websites will not be integrated. So if you subscribe to both services, and if you need to change your credit card or email address, you would need to do it in two places. Similarly, if you rate or review a movie on Qwikster, it doesn’t show up on Netflix, and vice-versa.”

Gosh, if he wants his company to go bankrupt that badly, I think there are easier ways to do it.

Now, let me be perfectly clear: I like Netflix, and my wife and I use it all the time. In fact, we have completely ditched cable (except for the broadband we get through the cable company), and now either watch Netflix, DVDs, or whatever stations we pickup on the HD antenna.

Honestly, I still think Netflix is an incredible bargain even after their recent controversial price hike. In fact, I think we may have been among the minority who understood that a price increase was necessary for Netflix to renew contracts and expand its streaming library.

And yet, in spite of this, Netflix also recently announced they had lost the contract with Starz movies, and would be dropping the entire Starz library from their streaming service early next year.

There are other streaming services out there such as Hulu, Amazon Prime, Vudu, and others, but none seem quite as good as Netflix. Hulu has a smaller selection and puts ads in the videos, even with their paid service. Amazon Prime and Vudu, as well as many others such as Apple’s video service, charge per movie rather than a flat fee. None of these offerings are acceptable in my opinion. Netflix is the only service that comes close, and they are starting to crumble!

Even CNN now speculates that Netflix’s days are numbered, offering that it will be impossible for a company with a mere $376 million in cash (I wish I had that…) to secure or renew meaningful streaming contracts from major multimedia conglomerates.

Early last year I wrote an essay on the Future of Total Multimedia Access. There I put forward the argument that it would not be unreasonable to charge $60 or so for a streaming service that combined pay-per-view new shows and movies with free streaming (with subscription) for year-old shows and movies. With 50 million households subscribed at $100 a month (base subscription plus additional purchases), that comes to $60 billion a year, which is a little more than the combined revenue of the music, movie, and television industries (as of 2010), and if 200 million households subscribed world-wide, that would bring in a whopping $240 billion.

On-demand streaming of movies and TV shows is technical and economical possible, and it baffles me as to why these sort of shenanigans are still going on in the year 2011. If Netflix does fail, we can only hope that someone sweeps up the smoldering ruins of what should be the next great phase in the digital revolution, and do it right.