It's better with Linux!

For a few months now, Microsoft and Asus have been running a FUD campaign against Linux. It’s not a big campaign by any measure, but just enough to be annoying (in much the same way that a yapping chihuahua is annoying). Ironically, until now Asus has been a big supporter of Linux on their low-cost Eee PCs. 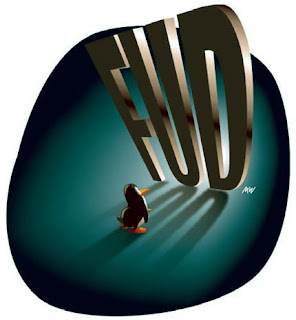 Officially, Asus points to a large number of returns, complaints, and customer confusion with regards to the Eee PCs they sold with Linux installed. That may well be true. After all, I can see how the average Joe might be confused by such a elegant and easy to use interface as the GNOME or KDE desktop on a system which already comes with a full gambit of office, graphics, email, IM, and internet applications pre-installed, when they are more used to interacting with a clunky, bloated, disorganized operating system like Windows on to which they must painstakingly load all their expensive (or pirated) proprietary software. Of course, that’s just me being sarcastic.

At any rate, the vomitous website in question is www.itsbetterwithwindows.com – and it is perhaps one of the best examples of FUD (Fear, Uncertainty, and Doubt) I have seen in recent years. They shamelessly state, and I quote: “Windows helps you quickly and easily get online and connect to your devices and services – without dealing with an unfamiliar environment or major compatibility issues.” What they fail to mention is that once online your PC will be high-jacked by a trojan botnet run by the Russia Mafia, or failing that, infected by a crippling deluge of viruses and malware.

Here’s the next belching burst of blubbering blabber: “Windows delivers a dependable experience that Microsoft and a worldwide community of partners stands behind.” And another pustuous prevarication of pernicious poison: “Windows is easy to use and familiar so you can be up and running right away.” And let’s not forget the last loathsomely loquacious lie: “You can be confident that your devices and applications will work with Windows – more than any other platform.”

But seriously, I’m not going to waste my time here counter-pointing these grossly misleading statements. And why should I? The truth of the matter is, Linux is not for everyone. Owning a doberman pinscher is also not for everyone, but they do make better guard dogs than chihuahuas (although chihuahuas are much more cute). The point is simply this: its all a matter of choice. We have a good, viable alternative, and that alternative is fast becoming a major contender to Microsoft’s flagship operating systems.

Until recently, Microsoft has not run a large scale anti-Linux campaign, and arguably itsbetterwithwindows.com is not a large scale anti-Linux campaign run by Microsoft (it’s technically a third party). But that day will come as Linux continues to whittle away at Microsoft’s market share. The fact that Linux is becoming such a powerful force that Microsoft feels the need to run these kinds of campaigns actually makes me smile deep down inside.

If you want more information about why you should choose Linux over Windows, just visit: http://www.whylinuxisbetter.net